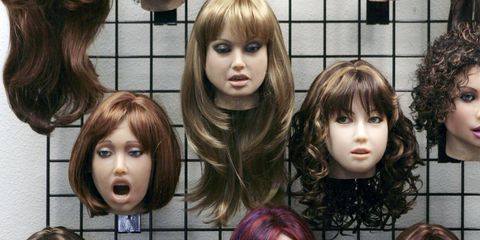 The Atlantic just published a deep-dive into the world of sex dolls, and their discoveries are as fascinating as they are alarming. Here are nine wild facts about the ancient art of crafting things to put a penis inside that we learned from the totally-worth-a-read article:

1. There is a man in Michigan who is married to a sex doll. "Davecat" is not legally married to his sex doll, but he sees her as his wife. You may recognize him from TLC's My Strange Addiction. He also owns two other dolls that he considers "companions." They each have Twitter accounts.

2. In Japan, they sometimes call sex dolls "Dutch wives." Because some of the first sex dolls were invented by Dutch sailors who were on the open sea for months and needed ... help. So they fashioned cloth puppets that the French referred to as "dame de voyage" and Spanish sailors called "dama de viaje." In both instances, it roughly translates to "dick puppet" "lady travel." Dutch sailors made them out of leather and then traded them to the Japanese, who still use the weird term to this day.

6. The RealDoll Company does manufacture male sex dolls. They only account for 10 percent of sales and there are fewer options in general (female RealDolls can be fully customized).

7. People who are super into RealDolls are called "iDollators." There's an entire fandom around the dolls, with some men treating them as real companions. Most of these men say they became iDollators because they find women too difficult to deal with. Davecat explains: "Ninety-eight percent of the iDollators and technosexuals I know treat their Dolls like goddesses. Dolls don't possess any of the unpleasant qualities that organic, flesh and blood humans have. A synthetic will never lie to you, cheat on you, criticize you, or be otherwise disagreeable." All righty then.

8. The inventor of the Fleshlight once tried to patent a sex doll. He submitted a patent way back in 1995 for a mannequin filled with an "oily elastomer." If that doesn't get you in the mood, I don't know what does.

9. Howard Stern is pretty much solely responsible for the popularity of the modern sex doll. In the '90s, he ordered a RealDoll for his show and apparently had sex with it on air. Orders for the doll skyrocketed, and the company now sells as many as 300 annually (they start at around $5,500 each).